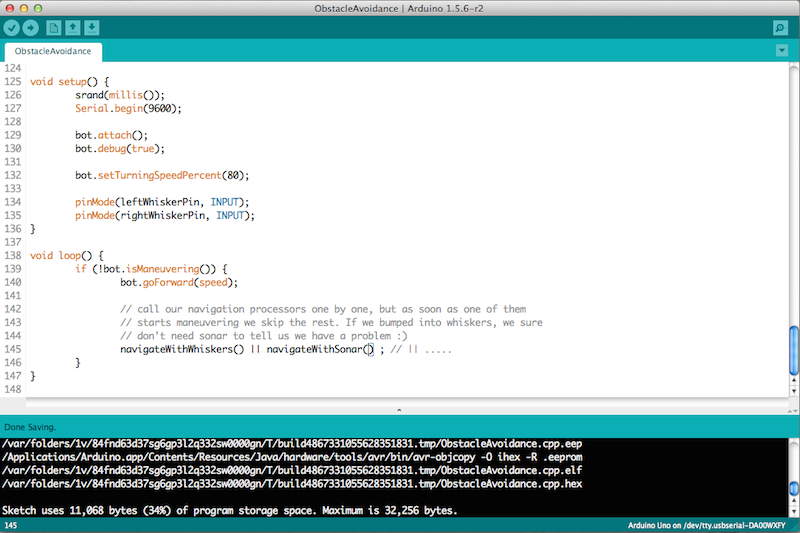 As a relative late comer to the Arduino world, I went through the beginner tutorials and examples using the provided Arduino IDE. I faithfully downloaded it from the arduino.cc web site, took a quick tour and was pretty unimpressed with the set of features. For one, I am very particular about the color scheme of my programming editors, and not having a choice was an immediate downer.

Arduino IDE is simple to use, and I think this was one of the key design goals for this software. It is commonly used to introduce many folks to programming electronics, and just programming, notably in C/c++. As such, this tool is pretty limited, and limiting too. Very quickly I found myself very stuck unable to browse through external symbols by clicking through them, using auto-complete features, refactor code, and so on: all the "basic" features I so got spoiled with, by tools such as JetBrain’s RubyMine, AppCode, IDEA, open source (but originally IBM’s) Eclipse, and not to mention Apple’s XCode.

After going through several example projects using the IDE I became more and more frustrated with its limitations. Programming hardware is hard enough (pun intended), and the IDE is supposed to make life easier.

So I became worried that my foray into electronics would die young if I didn’t find a more capable programming alternative, and so I started exploring.

First off — a tiny disclaimer: this is not a feature by feature comparison of Arduino-capable IDEs. It’s a personal opinion of an experienced software engineer, who recently entered this domain. I work on Mac OSX, and so I only briefly mention the Windows options. But on a Mac I did end up trying most of the options listed here.

When I talk about software IDE, I generally do not mean a fancy text editor. While I know that plenty of great developers love and use text editors on complicated software projects, the convenience of a true IDE on a small to mid-sized software project is hard to dispute. So while I do, when appropriate, use a combination of VIM or TextMate for exploring or quickly editing, I prefer to actually write code in a true IDE. If I had to define what true IDE means for me, I would list the following features:

My absolute favorite over the years have been the series of IDEs for all popular languages produced by JetBrains ---- a company that singlehandedly dominated the IDE nitche for over a decade now, including winning over droves of professional java programmers away from Eclipse.

But anyway, here is the list of what’s available for proper software development of the code, with Arduino as the final destination: 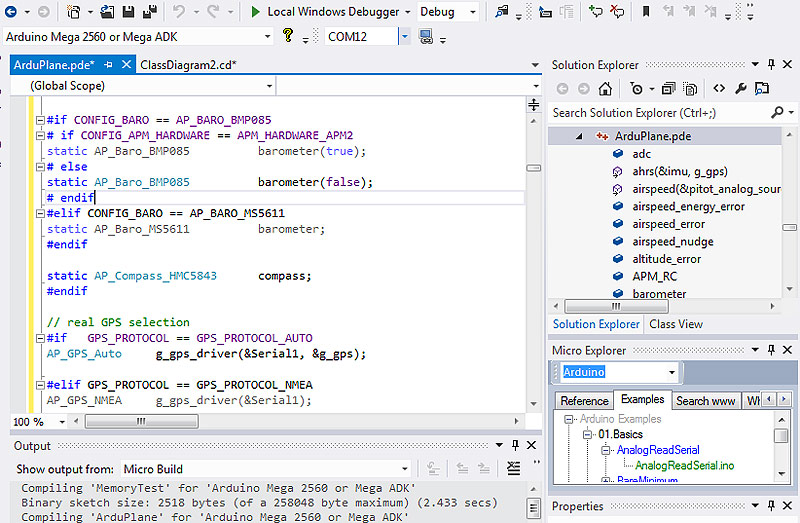 Having now used this IDE for several weeks straight, I am pretty happy with the Eclipse Arduino Plugin. The project is pretty active on GitHub, and the author is also quite nice :)

The Case for Open Source

One of the first things I bumped into, with the nightly build of the plugin and with my Arduino Esplora board, was a pretty major problem: I couldn’t upload any sketches. So I posted a bug report on GitHub, and author replied with a quick note on how to get the source of the plugin, and which class to look at, so that I could fix the problem. It sounded like a challenge. Of course I took it.

For the next few hours instead of working on my Arduino sketch I was fixing the Eclipse plugin. To my surprise, it was relatively easy to get setup with the environment where I imported the entire plugin source into JetBrains IDEA (haha, sorry Eclipse! You are still number two :) and was able to diagnose and fix the issue with the timing of opening serial port and uploading the sketch. A few hours later my pull request was merged, and the nightly build of Eclipse Plugin started working for everyone with Arduino Esplora! That, my friends, is the true power of open source.

While I was at it, I also updated the README with proper markdown and (perhaps) slightly better English. And of course I couldn’t stop there either, and continued going slightly crazy, massively refactoring serial communications of the plugin deep into the night, and then submitting a beautiful pull request. However, at that point the plugin author probably had gotten pretty annoyed that I was making his code look and work a bit better, and sadly rejected the PR, explaining that another rewrite of serial comms is happening. Oh well, at least I can keep using my fork on my own machine, where I get to see pretty error messages that actually explain what’s going on :)

Option 1: probably the simplest way to get started is by downloading the nightly build, in my experience they’ve been pretty stable. The single-file download will already contain a compiled binary (called something like "arduinoEclipse.app" or similar), and you can just run it.

Option 2: But my preferred way to install the plugin is to first install a full version of Eclipse Luna for C/c++, and then add Arduino plugin to it via software installer.

This blog post does a really good job at describing installation of the plugin. Skip to the section called Arduino Eclipse Plugin V2.2 and follow well written instructions with screenshots.

The only change to the above instructions I would like to mention, is that I used 64-bit version of Eclipse on the Mac, and did not bump into any issues. It’s possible I am not using any of the newest "Teensy" processors the author was referring to, but with 64-bit address space Eclipse sure has a lot more RAM to work with. If you have more than 8GB of RAM on your machine, you’ll see pretty significant performance penalty when using 32-bit version of Eclipse (or anything else for that matter).

Here I’d like to share some simple but powerful tidbits about how I use Eclipse, and why I think it’s so great.

If you are using Eclipse Plugin and would like to use my settings, please feel free to download them.

These are some great features, and I am very glad that this plugin exists, because my Arduino development is infinitely easier with it.

But this post has become way too long, and it’s time to wrap up. Next time I’ll talk about my robot movement library, and discuss using Eclipse for it’s development in more details.

I leave you with this beautiful screenshot of the Eclipse open with my library work in progress…​. 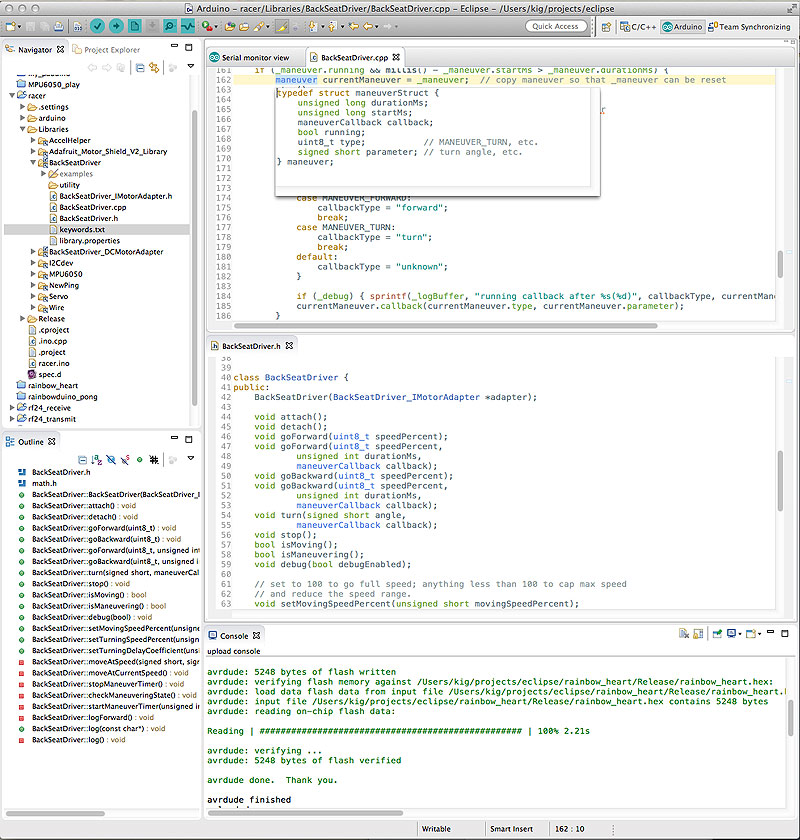